From Board Member To Resident 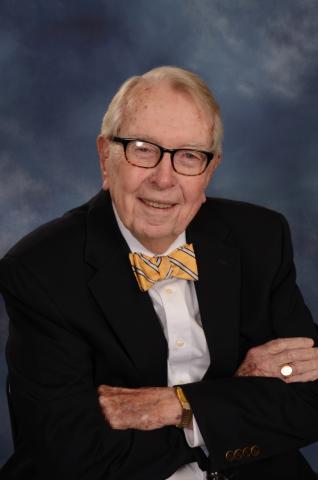 Carson Grantham has been a part of the Friends Homes family for over 40 years. He joined our Board of Trustees in 1978 and served on the Board for 25 years, including three stints as Chairman. His involvement came largely because he was a Quaker. “Everybody on the Board of Trustees at that time was a Quaker,” he recalls, “and we tried to have Quakers from all sections of the state, so they would have representation pretty widely.” Friends Homes was, of course, founded by North Carolina Quakers in 1958 and our mission is still guided by Quaker principles, although today our Board contains many members who are not Quakers. Born and raised in Greensboro, Carson joined the Board when he was a successful businessman, the owner of Grantham Hardware. “I sold door hardware primarily,” he says. “As an example, all the hardware that makes the doors in Friends Homes West function was supplied by me. That was the kind of thing I did.” It was a business he was part of from childhood. “My father had an old fashioned hardware store and that’s how I got into hardware, and that just gradually grew into selling door hardware as a specialty. It wasn’t a specialty when I first started; it just morphed into one.” His partner in the business was his wife, Mary Jane Grantham. “My wife had the business sense and the accounting training and she helped me in that regard, and I did everything else,” he says. During his time on the Board, Carson says the expansion of Friends Homes Guilford and the addition of Friends Homes West were the biggest changes he witnessed. He recalls one story about the development of Friends Homes West that he says exemplifies the trust and respect people in this area have for Friends Homes. “Another group had leased the property [where Friends Homes West now exists] and had started a retirement home,” he says. “They sold a lot of apartments, then somebody stole most of the funds. Friends Homes stepped in and took up that same option and lease of the property to build Friends Homes West, and they were able to convince people that they weren’t going to abscond with their money. I had a friend who bought two apartments in the original place and lost all the money he put down but came right back and did the same thing when Friends Homes took it over. I thought that was amazing. To me it certainly speaks to the trustworthiness of the Friends Homes name and Quakers in general. I think people must have felt that Friends Homes’ reputation was valid and this was going to be a place they wanted to be.” Carson was one of those people. After retiring and liquidating his business, he and his wife moved to Friends Homes West in 2006. “I’ve been very happy as a resident here,” he says. “Living here has a been a real pleasure.” He says his wife, who passed away in 2015, also loved living here. Today he enjoys spending time with his children and grandchildren. He and Mary Jane had three children, and one lives close enough to visit every Sunday. “I’m blessed in that regard,” he says. “She comes up and we go to church and she stays for the afternoon. And it gives her husband a day to play golf,” he adds with a laugh.