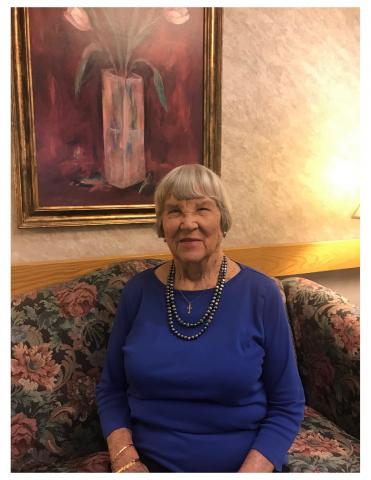 A native of St. Paul, Minnesota, Dona Butler’s life has included a whirlwind of opportunities that have taken her around the world as a beacon of light. She attended Bethel College, now a university, to study sociology. While in school, she and a friend were in a wedding that would also lead her to her own wedding day. “I went to call on my friend,” Dona said, “and when I got to her house, her brother was laying on the couch.” Her friend’s brother was Dona’s future husband, Lucius. They were married in 1950 when she was 22 years old. Shortly after, the Butlers had two sons and, in 1955, were called by God through the Baptist General Conference to be missionaries to Tokyo, Japan, and later, Korea. The couple then attended language school for two years while Lucius completed and published the first children’s Japanese Bible book. While living in Tokyo, Dona had their daughter and soaked in new relationships with friends and neighbors. While her husband was a missionary, she taught a Bible study, which continues to meet at Tokyo Baptist Church. While at one of her Bible studies, a new friend invited her and her children to a local tea ceremony. It became a beautiful, poignant moment for her during her time in Japan. “The teacher of the tea ceremony asked me afterward if I wanted to learn how to perform a traditional tea ceremony. It was wonderful. I was able to perform it at a local museum in Japan.” After their service in Japan, Lucius became the Interim Director of Compassion International in Korea, filling in for six months. By 1965, Korea’s deep resistance to the Japanese caused the family to move back to Minnesota where Lucius went back to school to get his Ph.D. “While we were there, the Director of Lucius’s program received a phone call from the University of Hawaii who asked if the director knew anyone who could help the school’s Asian students for a year. We knew that the opportunity would let us touch the lives of more people there than anywhere else. Many Japanese students received scholarships to be there, so we knew that was where we were supposed to be.” Lucius received his Ph.D. in Asian Studies in 1970 and, in Hawaii, held six 30-minute chapel services a week in various hotels on the island. But the family’s ministry wouldn’t stop there. Lucius worked in Foreign Affairs for the university and was sent to Laos. Later, he was an interim pastor, and the family moved all over Asia. He also received the Fulbright Scholarship to Cypress where Dona helped with archeologist excavations. Hawaii would call Lucius back to preach as the interim pastor for two different churches after that. The family also lived in Saudi Arabia under the direction of the U.S. Department of Labor for a year while he taught in a technical school. Once they decided to settle down, the pair called Hawaii their home until they chose to move closer to their daughter who lives in Greensboro. Twelve years ago, they made their final move to Friends Homes. Dona’s story is intertwined with beautiful stories of closeness and forgiveness from her time in Asia and her religion. She recalled one time in particular that stuck with her: the time she was asked to talk at the Hiroshima Memorial in Japan. “The person before me told the audience to never forgive the things the Americans did. When it was my turn, I didn’t know what to say, but I got up in front of everyone, and I said, ‘Peace and forgiveness always comes from within.’” We’re so happy to have Dona Butler here with us at Friends Homes. Thank you for everything you have done and continue to do here.