Friends Homes Struck the Right Chord for this Music Professor 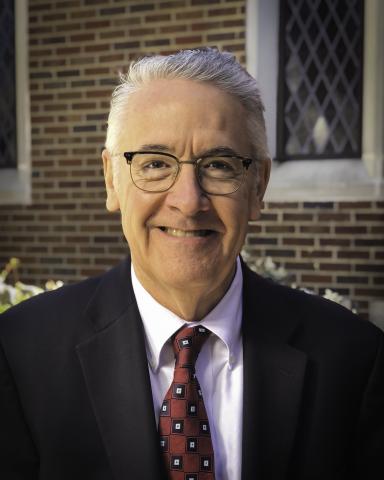 Bill Carroll likes living in Greensboro. He came here in 1984 to teach at UNCG and retired 34 years later as the Associate Dean of the university’s Music School. “Coming to UNCG was the best thing I ever did,” he says now. “Over the years I had numerous opportunities to leave or serve in administration at other places, but I always decided to stay. UNCG had such talented youngsters. I don’t think I would have had access to that level of talent in any of the other schools I might have gone to. And I just liked Greensboro. I found it a great place to live.” That desire to remain in Greensboro was one reason he chose to retire at Friends Homes. “When I decided to retire my father and brother were both anxious for me to come back to Mississippi, where I grew up, but I had made my life here and I couldn’t see leaving Greensboro,” he says. Bill’s father is a retired Methodist minister. Bill’s brother has carried on that tradition and is also a minister. Bill says his parents wanted him to join the ministry as well, but he had a different calling – music. “Music was always a part of our home,” he recalls. “Both my mother and my grandmother were pianists, and my dad was a horn player. So, music was always a part of life for us.” But, while his parents loved music, they weren’t sure it was a viable career choice. “When I was in high school and let it be known that I was going to go to college in music, they were concerned that I wouldn’t be able to provide a livelihood for myself,” Bill says. “They were anxious for me to be a Methodist minister.” So, after getting his degree in piano performance at Millsaps College in Mississippi, Bill went on to Southern Methodist University on the theology track. But it was not to be. “I was in Systematic Theology class one afternoon, bored to death, and the SMU choir was rehearsing the Brahms Requiem in the chapel next door. Hearing them, I just knew I was in the wrong place. So, I entered the music school the next day.” It proved to be the right decision. Bill got his Masters from SMU and PhD from the University of Connecticut, then taught conducting, first back at Millsaps and then at UNCG. He found it very rewarding. “I loved watching students succeed, both while they were matriculating and afterward,” he says. He has kept in touch with many students over the years and even traveled long distances to visit them and see them perform. He has also traveled the world to indulge his love of opera, going to such far flung cities as Berlin, St. Petersburg and Urbania, Italy for performances. La Bohème is his favorite, he says, but adds, “I like contemporary opera as well. I know that’s not something a lot of people enjoy, but I do enjoy it.” His other musical passion is piano music. “I love piano music, especially Brahms,” he says. When he was considering retirement a few years ago, Bill knew he wanted to stay in the Greensboro area, so he looked around to find the right place before deciding on Friends Homes. “I visited a number of retirement communities in the area,” he says, “but I knew a lot of people here. A lot of people here sang in my choirs.” Bill conducted the Choral Society of Greensboro for 15 years and still directs the choir at Ebenezer Lutheran Church. “So this seemed like the right choice.” It was. “I’ve been here almost two years and it’s been fantastic,” he says, smiling.