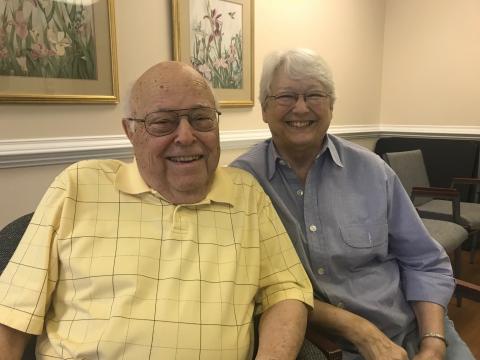 When Irwin and Judy Smallwood met, it was all business. He was planning for his big move to Friends Homes, and he had hired her as his senior moving specialist to get the job done quick and easy. Judy had created a thriving business in helping people to downsize, organize, and prepare for their next chapter in communities like Friends Homes. Irwin was just another client. “We spoke often,” she recalled, “but he was a client. I wasn’t going to blur that line.” Once Irwin was settled, he knew he had to do something before he never saw her again. “I told her towards the end, ‘Let me take you out to dinner for doing a good job,’” Irwin said. “Five dates later, I said to her, ‘How many dates do I have to take you on to kiss you?’” Irwin laughed and Judy nudged him and rolled her eyes. This is the chemistry of true love in retirement: one of banter, jokes, and affection. Judy came “from everywhere” as she puts it. “I’ve moved 36 times. Growing up, my father was a hotel manager, and my first husband worked for IBM, so we were always moving somewhere.” Yet, the one thing that kept her still was music, especially singing. Despite their moving, Judy’s first husband had many friends. In fact, Irwin was one of them, though Judy and Irwin only met in passing before the fateful day she found herself helping him move. Unlike Judy, Irwin has lived in and around Greensboro his whole life, working for the Greensboro Daily News as a reporter. “I wanted to be a reporter for a long time,” he said. “During WWII, most of the pros went off to war. I was hanging around the paper in high school, and after my last exam, I went to work at the paper.” He started in sports for 15 years before transitioning to news for another 15 years. He was promoted to city news editor, managing editor, and finally as an executive sports editor over the ACC and golf divisions primarily. “At one point, I was over about 120 people,” he said. Irwin also taught at the University of North Carolina at Greensboro from the 1970s to the 1990s. He’s since been retired for over 29 years. When Irwin met Judy, he had already lost his wife to Alzheimer’s while she had been married twice prior. She wasn’t sold on being in another relationship. “I remember saying out loud to my late husband, ‘Send me a sign if this is right,’” Judy recalled. They were going to a local sandwich shop, one in which both frequented before they had properly met. “I knew when he ordered the same thing as my late husband that he was it.” “Pastrami with no mustard and no pickles,” they said together and laughed. It took less than a year before the couple, he 19 years her senior, knew that they would be married. “He’s the same age as my late husband,” she said. “It didn’t take long before I fell in love.” “It’s hard to find someone who is as smart, funny, spiritual, and liberal as she is,” Irwin continued. “Especially at this age. It’s remarkable.” Irwin and Judy Smallwood married in 2010. The pair has been residents here at Friends Homes for over 8 years. We’re thrilled to have you as part of our Friends Homes family.