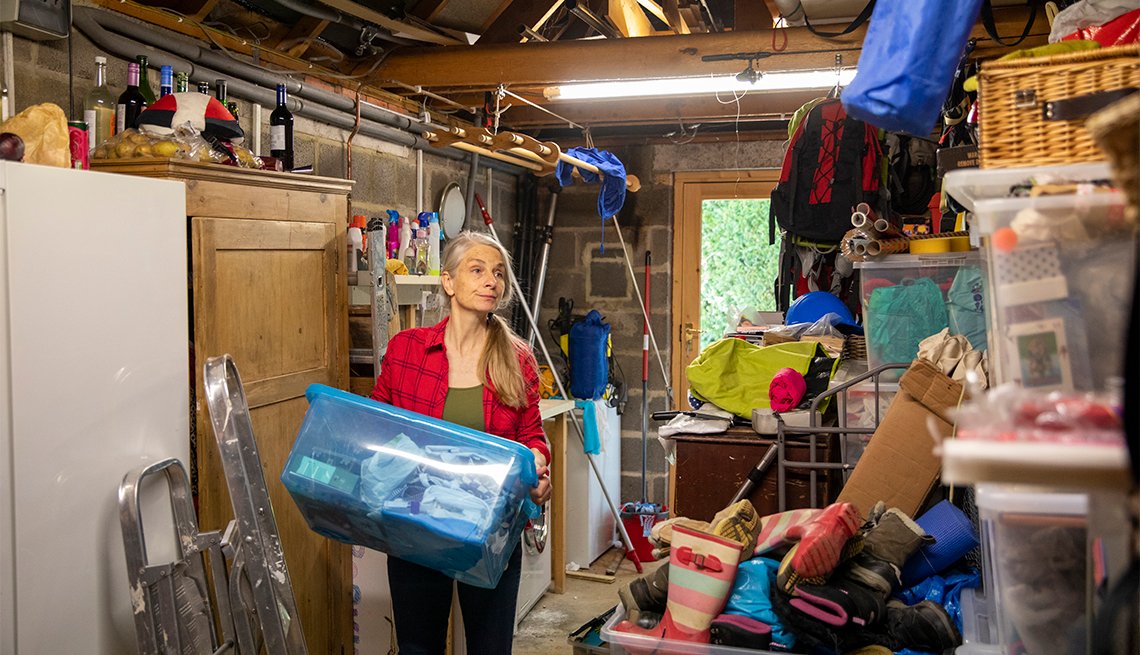 We love to think about decluttering and organizing. But we don’t always love to do it.

Last year, people binge-watched The Home Edit on Netflix to see pantries and bookshelves organized in a rainbow of colors and messy garages and bedrooms transformed. In the past, people have Marie Kondo–ed their closets and drawers by tossing items that don’t spark joy.

It can be hard to get around to decluttering in real life, even when people are spending more time at home because of COVID-19. But a few small steps can help jump-start the effort and may even improve your mental health just as much as your home.

“The more clutter you have, the less happy you tend to be,” says Joseph Ferrari, a professor at DePaul University, who along with his research partner has studied the negative impact of all that stuff. “The more you have, the less life satisfaction people report.”

After Beverly LaZar went through a divorce and began contemplating a move, she assessed what she wanted to take with her. LaZar, 52, from Cedar Crest, New Mexico, realized her family had “accumulated a great deal of stuff” after living in one place for 24 years. Much of it was squirreled away in boxes in her garage, barely looked at.

She’s decided to tackle organizing what’s accumulated in those boxes. “I do not wish to move all of these things across the country,” she says.

The older you get, the more mugs, memorabilia, furniture, books, papers and accessories seem to pile up. So where to begin when it comes to organizing and decluttering?

“I always suggest starting with removing the trash first,” says Nikki Bell, a professional organizer in Houston. “Grab a trash bag and just walk through the space throwing away anything broken, damaged or actual trash.”

Cardboard boxes can take up a lot of space, so removing them changes the way you view a room, Bell says. After that, pick one small area to tackle, like a drawer, in order to ease yourself into the work.

To start her decluttering project, Sabrina Hamilton, 52, of Colorado, picks one room, assesses the clutter, and starts sorting, using a system many professional organizers follow.

“I create three piles: what I’ll keep, what I’ll donate and what I’ll throw away,” she says. “With each item I’m considering, I decide if it’s meaningful, useful or useless.” Meaningful items get to stay, useful items that she no longer wants are passed along, and useless stuff goes in the trash.

From there, Andrew Mellen, a professional organizer in New York City, encourages people to start organizing. He suggests following what he calls his “organizational triangle” — “one home for everything; like with like; and something in, something out.”

Letting go of items can be hard

Of course, parting with possessions can be emotionally difficult for some people. That’s because the objects may be imbued with good memories, believed to be valuable or seem worthy of passing on to the next generation. That’s when it’s time for a talk.

“I am a firm believer in frank conversations,” Mellen says. For people holding on to items to pass to the next generation, Mellen recommends asking the intended recipients if they actually want that wedding china, family silver or antique painting.

“When it comes to things that don’t have an inherent monetary value, you have to have a willingness to be vulnerable and have the conversation: ‘I love you, I’d like you to have this, do you want it?’” he says, adding that you have to “be OK with them saying no.”

But all that work can get exhausting very quickly. That’s why Bell recommends breaking up your decluttering work.

“The clutter didn’t arrive in a day, so don’t expect it to vacate in a day,” she says. “Schedule time to work on your home, set a timer, and applaud yourself at the end of each session. You may not be finished, but you have started. Keep going!”

If all else fails, hire a professional organizer. “Once you’ve reached a point where you no longer are able to meet your goals, it’s time to call in the big guns to get you back on track,” Bell says. “A fresh set of eyes on your space can do wonders.”

As for LaZar, two years after her divorce she is ready to move on from her past and let go of the stuff that came with it. “I am stronger emotionally, and I am more willing to let go of things I clung to in the past,” she says. “I want to focus on creating life experiences and new memories, instead of holding on to old things that no longer serve me.”

Simple Ways to Declutter Your Spaces