Chef Nick Hunter is right where he wants to be. 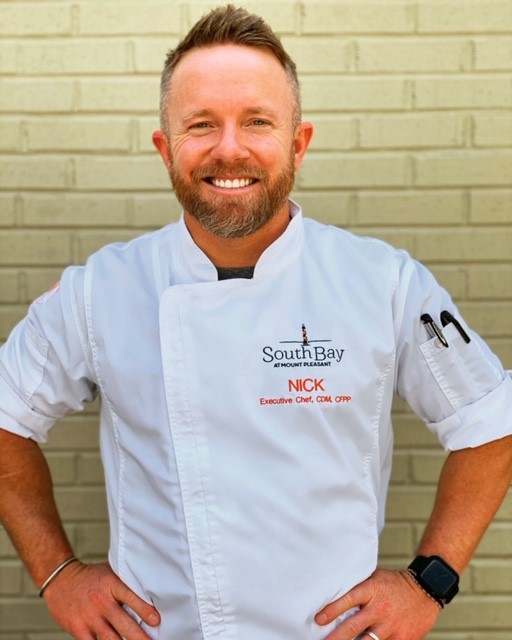 The dining venues of Friends Homes may be quite different than the intense competition of the Great Food Truck Race. But that suits Nick Hunter just fine. The Friends Homes Senior Executive Chef shares his experience in the competition and in the kitchen.

Back in 2017, Nick was part of a three-chef food truck team from Charleston, S.C., called Braised in the South, that won the eighth season of the popular Food Network competition. The show, hosted by Tyler Florence, brings together teams of chefs from different parts of the country to compete in a series of challenges all centered around creating unique food truck cuisine.

Ironically, Nick and his two buddies, chefs Brandon Lapp and Steve Klatt, were able to audition and participate in the competition because two of them had left their high-end restaurants and had turned their talents toward high-end healthcare dining instead. “We wanted to have an actual life,” explains Nick. “It seems like there’s never time… when you’re grinding it out in the restaurant industry.”

After a few bumps in the road in the early part of the competition, Nick’s team soon hit their stride. “It was the battle for the South that started in New Orleans,” says Nick. “Once we got our legs under us… we kind of ran away with it.”

Their success had a big impact on Nick’s career, as well as on their area of culinary arts.

“That success opened up a lot of doors and opened up the minds of young chefs of what we were doing in higher volume retirement community dining,” he says. “It’s a whole different challenge… to experiment and make it more of a hospitality experience.”

As an executive chef with Morrison Living, Nick moved to Greensboro last year with his wife and daughters to become the Senior Executive Chef for Friends Homes. With the community’s dining services undergoing a significant upgrade as part of the overall expansion, Nick has turned out to be the perfect chef to raise the bar on dining options on campus.

In addition to assembling a lineup of talented chefs, Nick has brought his creativity and ability to push the envelope on exciting new menus and environments across the community. But his focus is always on the residents.

“I always keep in mind that we are cooking for someone’s family,” says Nick. “This is their home, their kitchen… We remind our team of that every day.”

He’s excited about the future dining opportunities that Friends Homes is preparing to open, including two new dining venues and the two existing venues, all offering new enhanced menus and culinary offerings. In addition, residents are always encouraged to take an active role in the dining experience through teaching kitchens and chef demos, along with Talk and Taste events with the community’s registered dieticians. The residents have also been involved in developing the new restaurant designs and menu options.

For Nick, it’s important to understand how food can impact the residents’ lives. “When you think about your favorite times, they almost always involve food,” he says. “Food can change your whole outlook on things.”

But does he miss the high-stress life of a chef in a high-end restaurant? According to him, he finds what he’s doing now much more rewarding, even more than winning The Great Food Truck Race. “This is more rewarding than any dish I served in a five-star restaurant,” he adds.