Cris Schamp is Ready to Roll 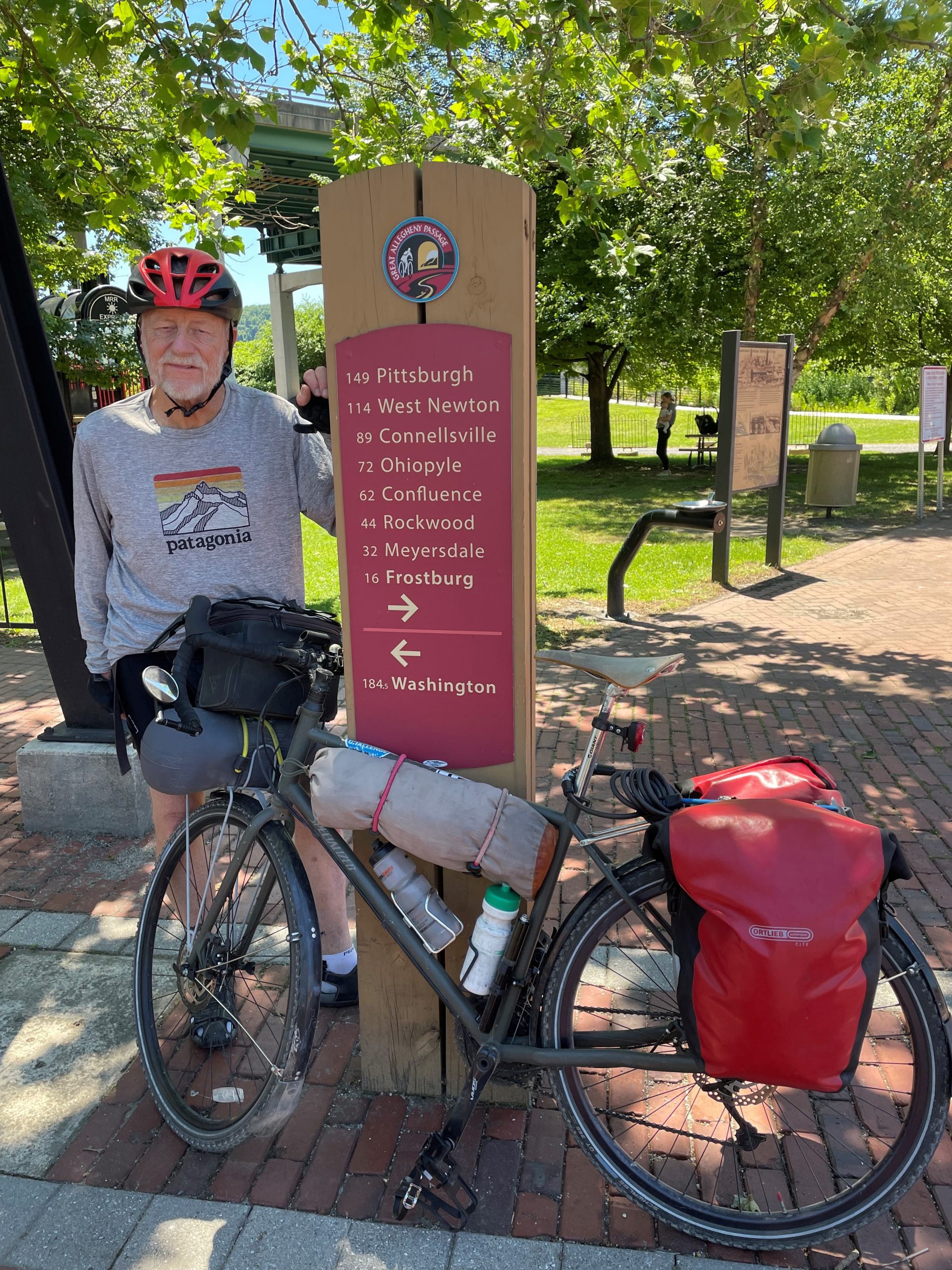 Future resident, Crispin (Cris) Schamp and his wife, Margery Knott, are looking forward to moving into their new cottage at Friends Homes this August. And according to Cris, he’s bringing his passion for cycling and fixing up bicycles with him.

Cris got into cycling in his 20s when he rode across the United States from San Jose, California to Syracuse, New York. The trip took him 16 weeks.

Over the years, he had often bicycled to work. But he really got back into touring again once he retired in 2014 and moved to Greensboro in 2015. Since then, he’s done several more tours, including a solo tour cycling all the way to Iowa and back to Greensboro covering 3,100 miles over two months, which happened to coincide with his 70th birthday.

He’s also ridden a bike trail stretching from Washington, D.C., to Pittsburgh, Pennsylvania. He broke the trip up into two parts. “I biked from Cumberland, Maryland to Pittsburgh last year,” he says. “Then, just this past month, I did the other half going from D.C. to Cumberland. It took us three and a half days.” And Cris shows no signs of slowing down.

“Cycling keeps me active, keeps me out of the doctor’s office,” says Cris. “Doing the tours has kept me riding more now so I can be in good enough shape to go.”

Cycling is also a passion that Cris loves to share. He volunteers his time and talents with Bikewalla, a Greensboro organization that fixes up old bicycles to give away or sell at a low cost to children and adults in the community who need them. Cris helps transport and repair bikes at the organization’s recently opened Community Bike Shop at Barber Park in Greensboro.

Cris also helps with biking events throughout the city, such as Wheels on the Greenway and different community centers putting on “bike rodeos.” The events give kids access to bicycles, helmets, safe riding instructions, and bike repairs. The Community Bike Shop also works with different nonprofits to provide bicycles to people who need them for low-cost transportation.

The couple currently lives near downtown Greensboro where Cris keeps a bike repair workshop in the backyard. They moved to the area to retire and be closer to Margery’s son, John Cocking, who went to school at Guilford College. The philosophy of Friends Homes with its Quaker influence appealed to Cris and Margery. So when the expansion opportunity came about, they decided to go for it.

Once they get settled in on campus, Cris looks forward to sharing his enthusiasm for cycling with fellow residents. “I’m hoping to carve out a little corner of one of the woodworking shops for a bike fixit area,” says Cris, who wants to continue to repair bicycles and ride as long as possible. Of course, that’s partly why they chose to come to Friends Homes. “We liked what the community had to offer for the right cost for us,” he explains. “To go in as independent and have our levels of care covered throughout our lives.”

But for Cris, he’s really looking forward to the new wellness center, including the pool, to help him stay fit enough to keep cycling. “Like I said,” he adds, “it keeps me out of the doctor’s office.”