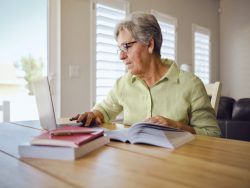 What happens when older adults go back to school? Researchers investigated the cognitive benefits of coursework for older adults in a study that earned a 2020 Silver Innovative Research on Aging Award.

In two interventions, researchers examined how learning multiple real-world skills impacts older adults’ cognitive health. The aim was to mimic the course load of younger students. In the first intervention, six older adults (average age 66) participated in Spanish, art, and iPad classes, and their performance on cognitive tests was compared to seven older adults in a no-contact control group. Both groups completed pre-, mid-, and post-intervention measures of cognitive performance.

Each class met for two hours, once a week for 15 weeks, and participants had an additional 8 to 10 hours of homework per week. The second intervention was similar to the first, except it was three weeks shorter. Eighteen older adults participated (average age 69), baseline measures were used instead of a control group, and two additional classes were available—photography and music composition.

There were no group differences in the first intervention, but the addition of more participants in the second intervention showed improvements in cognitive functioning over participants’ baseline scores. More specifically, cognitive control, working memory, and episodic memory improved by the intervention’s mid-point , while digit span performance did not change. Interestingly, spending more hours on coursework was also associated with better cognitive function.

This research is promising, but the sample sizes of both interventions were relatively small. Future research should include a larger sample and may investigate the effects of different course combinations or taking more or fewer courses. Lifelong learning is a great way for older adults to stay active, and potential cognitive benefits are extra credit.