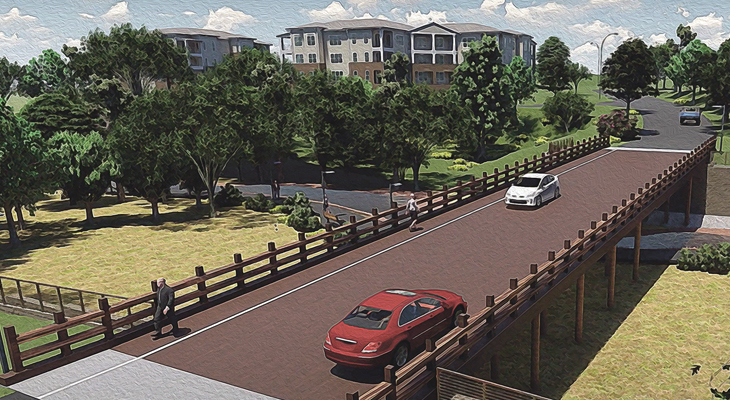 The Capital Campaign for Friends Homes has already gotten a fast start toward reaching its goal, both financially and physically. Sarah Barker, our Associate Director of Development, shares how the campaign is allowing the community to more fully achieve its mission.

The campaign’s goal, through charitable giving, initially started out to raise $1 million. Eighty percent of giving will go toward the cost of the building of the bridge physically uniting  the Friends Homes community. This physical connection between Friends Homes West and Friends Homes Guilford will allow new and existing residents to move more freely throughout the community. But the main benefit of the bridge is a matter of unity.

“What it comes down to is togetherness,” says Sarah. “We really see unity coming as a result of this connector with enhanced opportunities for all to participate in the growing number of activities, dining and wellness programs across the whole community.”

The 146-foot bridge will provide ample space for cars and golf carts while also including a wide pedestrian path. The bridge will pass over the future Bicentennial Greenway connection planned by the City of Greensboro and greatly increase the ease and safety of getting from one side of campus to the other.

According to Sarah, the capital campaign will also benefit the community in a meaningful way financially. Twenty percent of the funds raised will be used to establish a permanent endowment for  resident financial assistance. Resident financial assistance makes it possible for individuals who, through no fault of their own, find themselves unable to meet the costs of their care and living expenses.

The new endowment will serve as a much-needed financial bridge for residents to remain part of the community and to know that they will always be at home at Friends Homes.

“There’s a huge need there,” explains Sarah. “We are committed to serving residents by providing an affordable, comfortable, and an enjoyable environment. It is so important should a resident ever run out of financial resources to give them that peace of mind…

“It’s a promise we make to our residents. We take it very seriously. This endowment will be important for fulfilling that need for generations to come.”

The capital campaign is only just beginning its public phase but is already building momentum. Construction of the bridge is already well underway and is expected to open in September 2022 as part of the ongoing expansion at the community. The encouraging level of support so far has also inspired the Friends Homes Campaign Cabinet to raise the overall goal to $1.2 million.

Sarah says that any existing or future resident is welcome to learn more about the Capital Campaign for Friends Homes or make a contribution by contacting her at sbarker@friendshomes.org, (336) 458-0354, or by visiting friendshomes.org and clicking the campaign link that appears at the bottom right corner of the screen.