Making Friends Wherever She Goes

Margaret Postels has no trouble making friends or making up her mind. Her decision to come to Friends Homes was quick. And she’s been enjoying herself ever since. 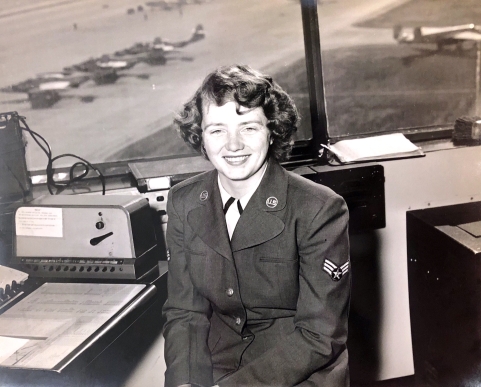 Long before she fell in love with the affable and welcoming community at Friends Homes, Margaret Postels made another big decision more or less on a whim. She joined the Air Force.

She had recently graduated high school in Salisbury, Maryland and was working in an office job when she and a friend “decided to go see about joining the service,” she says. They went down to sign up, but discovered they needed a parent’s signature to join. Unfortunately, Margaret’s friend’s father wouldn’t sign, so Margaret ended up going into the service alone. It was the start of a sometimes exciting, sometimes excruciating four years.

She was flown to San Antonio, Texas for basic training and was assigned to work in the control tower at the airfield. “I was very happy when I got that job,” she says. It ended up being her ticket to see a lot more places because, she recalls, “they were desperate for control tower operators all over the place.”

From San Antonio she was sent to  Hamilton Air Force Base in California, a little north of San Francisco. “It was fun, it was exciting,” she says. “We just had one long runway and at that time they were scrambling jets if they’d see a UFO or something.” Then she got orders sending her to a new location, but she didn’t want to go. “These orders came down for me to go to Hickam Air Force Base in Honolulu. And I went to my boss and I cried and I cried and I said, ‘I don’t know anybody there.’ Here I am 19, 20 maybe, and I’d never even been out of Maryland, practically, in my life, and I didn’t realize what a treasure Hickam Air Force Base would have been. So, I didn’t go. I stayed there. But the next time the orders came with my name on them, I guess I was ready to go. And that was to Ernest Harmon Air Force Base in Stephenville, Newfoundland. Can you believe that?”

The base in Newfoundland also only had one runway but was not nearly as exciting as Hamilton had been. “That was, without a doubt, the most boring job in the world,” she says with a laugh. After a while she decided working in the tower wasn’t for her, so she was reassigned as a secretary, a job she had actually been trained for in high school. She also made some friendships in Newfoundland that continue to this day.

After a year in Newfoundland, she was on the move again, this time to Strategic Air Command (SAC) headquarters in Omaha, Nebraska. There she served under General Curtis Lemay, who transformed SAC into one of the country’s primary tools for the deployment of nuclear weapons and later went on to become Chief of Staff of the Air Force. But Omaha was not a place she enjoyed. “Everyone called it the armpit of the universe,” she recalls.

So, after four years and four different assignments, Margaret decided to leave the service. Not sure what to do next, she moved to Tucson, Arizona and lived with a friend. She went on to attend the University of Arizona and, in 1958, met her husband Robert there. They were married in 1959, and within a few years she was raising their two children while his job as a metallurgical engineer took them to more new places. Eventually they came to Greensboro, where he worked for Western Electric and then Westinghouse.

Robert retired in 1995 and unfortunately passed away ten years later. Margaret moved into a townhouse in Greensboro where she lived for about ten years, but then decided she wanted to be in a more social setting. “We had a lot of women in the neighborhood who were widows, but they never wanted to do anything,” she says. This led to her visit to Friends Homes and, just like joining the Air Force, she made her move to Friends Homes West with very little hesitation. It’s a decision she’s very happy she made. “This turned out to be the only place I looked. And maybe that was wrong, but more and more I don’t think so. The people are so extremely friendly here. You don’t walk down the hall and not have somebody say hello to you. It just doesn’t happen. And,” she adds with a smile, “you can make some really good friends here.”