The Sandins Feel Right at Home in 204

Tom and Emilie Sandin waited a long time for this. It was the moment back in January 2018 when they heard that the apartment in Friends Homes Guilford was finally going to be theirs. Not just any apartment. But apartment 204. 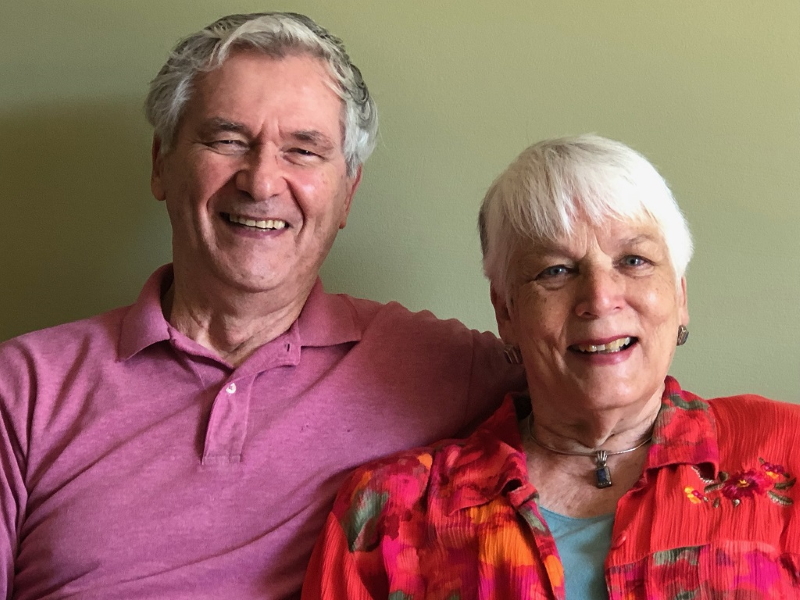 It started more than 25 years ago with a visit to Friends Homes and the apartment of Arthur and Peggy Bonney. Tom and Emilie were on campus for a tour when the Bonney’s invited them into their apartment, 204, to see the layout.

“I said, ‘oh this is just perfect!’” says Emilie. “We filled out the application form… And over the next 24 years… we always sent the (interest) form back adding ‘and we like apartment 204’ to the first line.”

The Sandin’s journey to Friends Homes goes back even further, however. The couple have known each other most of their lives, having grown up going to the same grade school and high school together in Tucson, Arizona. They got married while Tom was in graduate school at Purdue University and they “were blessed with four little Hoosiers,” jokes Emilie, “by the time he got his Ph.D in Physics.”

The couple added a fifth child (“our only Tar Heel,” says Emilie) when they moved to Greensboro, eventually settling into a home in Westerwood where they would live until making the move to 204, Friends Homes Guilford.

Along the way, Tom and Emilie “found Greensboro to be welcoming, supportive, and encouraging for over 50 years,” explains Emilie. “While Tom was teaching physics and authoring physics textbooks, I was able to volunteer for various commissions, committees, and boards for the city, our neighborhood, my Quaker meeting, and other organizations.”

Emilie also became a potter with a women’s craft cooperative called the Mud Daubers and was a founding member of the Carolina Clay Guild. Together, Tom and Emilie became 4-H and Worldwide Marriage Encounter leaders and they still deliver two routes for Meals on Wheels every month.

In the fall of 2017, Tom decided that the 2017-2018 school year, his 50th, would be his last as a physics professor at North Carolina A&T State University. “Our two oldest daughters said, ‘Thank goodness dad finally retired so now we can!’’ says Tom with a laugh.

“We came over to let Friends Homes’ staff know that we’d be ready to move by summer of 2018,” says Emilie. “In January 2018, the call came that an apartment would be available by mid-April and that if we wanted it, we had to claim it.”

Since then, the transition has been a good one. While the process of moving and downsizing from their home of 40 years was a big job, the Sandins are every bit as taken with their new home as they were when they first saw it.

“Perfect got even better!” says Emilie. “Sometime during our years on the waiting list, a door was cut between 204 and the studio apartment 202. So, the one bedroom, one bath apartment had become two bedrooms, two baths.

“I came over,” Emilie continues, “and Mary Knobloch helped me choose colors, carpet, and flooring to turn the apartment into our new home.”

These days you’ll find Tom and Emilie enjoying the fitness center, doing Drums Alive with Randy Lee, performing Tai Chi, as well as on the grounds committee (Emilie) and library committee (Tom). They also enjoy entertaining any number of their 11 grandchildren or 2 great-grandchildren whenever they get the chance. “They enjoy eating with the ‘Greensboro Grands’, as they call us,” says Emilie.

But it’s the people at Friends Homes that have made the biggest impression on the Sandins. “We say we live on Main Street,” says Emilie. “Ours is the first apartment you come to on your way from the dining room… everyone goes past our apartment.

“There seems to be an anti-grouch screening process,” Tom quips. Emilie laughs, then adds, “Everyone is their best self… We feel very privileged to be here.”