Sandy and Peggy Got a Late Start 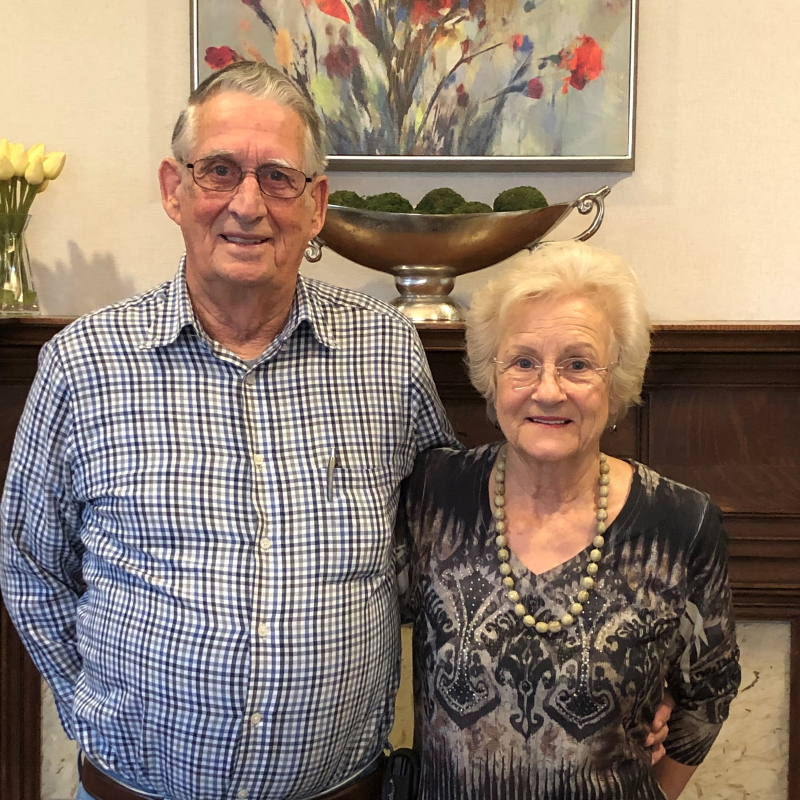 Although Sandy and Peggy Holder both grew up and lived nearly all of their lives in the Asheboro area — Sandy is originally from Liberty while Peggy is from Seagrove — the couple found each other only 12 years ago. Today, the happy couple is enjoying their new home at Friends Homes.

Sandy worked for over 45 years as a general manager in lumber operations for Liberty Furniture and later, Klaussner Furniture. And until he was 35, Sandy played semi-pro baseball as a pitcher for one of the town-sponsored teams in the Randolph County League.

Meanwhile, Peggy was a chicken farmer, raising up to 40,000 birds at a time on her Seagrove farm. She played basketball in high school and was an All-County player. When she was 65 years old, she even played point guard for a team in a league that featured players older than 80. “Some of them are really scrappy ladies,” says Peggy.

The couple were introduced after Sandy’s wife passed away from Alzheimer’s in 2007. Peggy, whose husband passed from cancer in 2005, had a friend who worked at the nursing home where Sandy’s wife had received care. Understandably, this was a difficult time for Sandy. “My friend told him she had a friend she wanted him to call to have someone talk to,” says Peggy.

After a while, Sandy did call. The two started talking and grew to become friends. “We talked on the phone a long time. Then we got together and went out to eat,” Peggy continues. “Then after about two years, we decided we needed each other and so we got married and have been happy ever since.”

It was important to Sandy, though, that he have the blessing of Peggy’s two grown sons before the couple went through with the ceremony. “I told Peggy we were not going to get married unless it was okay with her two sons,” says Sandy. “And they seemed to think it would be all right.”

They’ve been together now for 10 years.

The couple started thinking about a continuing care retirement community only a few years ago. They had both saved money for retirement and with family living far away wanted to find a place where they felt welcome by residents and staff.

The couple only knew about Friends Homes through friends of Peggy’s from church, who years ago advised her to put her name on the list for Friends Homes. At the time, Peggy was only 40 and thought the community would be out of reach, even more so after her first husband passed away.

Peggy’s friends, Naomi and Pat Kilpatrick, have been living at Friends Homes for 26 years. “They had a very big influence on us coming here,” adds Sandy.

They toured a number of area communities, but Friends Homes always set itself apart. “It’s just like the title says,” explains Sandy, “’Friends.’ It’s friendly to the point that we just felt like we had 200 friends here from the first day we started talking to them. And the staff is so friendly as well.”

They made their deposit in 2015. After turning down opportunities to move in much earlier, they eventually decided to make the move to their Friends Homes West apartment earlier this year. Six months later and they are thrilled with their decision and the new friends they’ve made in such a short time.

“Peggy had long-time friends here,” says Sandy. “And come to find out, I had I don’t know how many folks who were from the Liberty area…”

Sandy and Peggy still return to their Asheboro home on the weekends as they continue to downsize and prepare their house there for sale. With their weekends away, they haven’t gotten to take advantage of as many activities as they have wanted to. However, they have managed to become big fans of the frequent outings that the community offers, especially the summer trips to the Greensboro Grasshoppers and High Point Rockers minor league baseball games.

Peggy has enjoyed the fitness center and the community’s dining options. “I’ve cooked all my life. We’ve been up here six months and I haven’t cooked a thing…” says Peggy. “When (family) come to visit, they have been very impressed with Friends Homes. And I don’t have to do a thing,” she adds with a laugh.

When looking for a community, the Holders suggest looking around to find the right fit for you. “Keep an open mind and compare places,” says Sandy. But for the Holders, the people at Friends Homes are what make all the difference.

“That was a big thing to us,” says Peggy. “We wanted to feel wanted and for everyone to be nice. And we found it all here at Friends Homes.”