The Coxes Are Coming Home 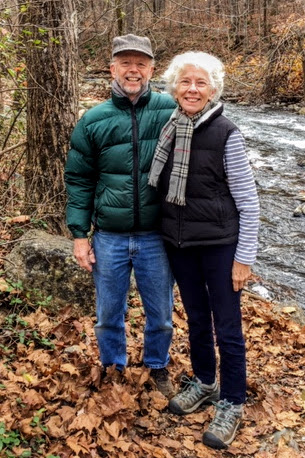 Jonathan and Emille Cox have always known they’d end up at Friends Homes. And as future residents of the community’s upcoming expansion, they can’t wait to make the move.

“We’ve always known it was where we wanted to be,” says Jonathan. “As soon as the expansion popped up, we jumped right on it.”

The couple is looking forward to moving into one of the new duplex homes on the Guilford campus at Friends Homes. Construction on the duplexes is set to begin in early June with completion targeted for the summer of 2021.

For the Coxes, the connections to Greensboro run deep, especially for Jonathan. His family ties to Guilford College and the local Quaker community date back to the 1860s. “My family has been involved at Guilford for six generations,” explains Jonathan, himself a graduate from Guilford College in the 1960s. More recently, one of Jonathan and Emille’s three children graduated from there, as well.

Jonathan continued on from Guilford College to attend graduate school at UNC Chapel Hill before going to work at IBM.

After Emille graduated from UNC Greensboro, she also went to work at IBM. It was there that she met Jonathan. “We worked together for several years before we ever did so much as buy each other a cup of coffee,” Jonathan says. The two eventually fell in love and got married.

Over the next 44+ years, careers and life may have pulled them away from the area. But they always knew that North Carolina, and especially this quiet section of the Piedmont Triad, was their home. Jonathan did a tour in the Army in cryptography. And their jobs for IBM moved them to Raleigh, among other places. “I worked a lot of different places but we always kept the family in North Carolina,” says Jonathan.

“While we lived in Greensboro, we knew a lot about Friends Homes and at one point I was on the board of trustees,” explains Jonathan. “We both had relatives at Friend Homes.”

When they initially retired to a home in Linville Gorge, they knew that they would eventually come back to the Triad area and Friends Homes. Four years ago, they decided it was time to come home. “We moved to High Point with the intent of going to Friends Homes,”

The couple now lives in a neighborhood only a few miles away and enjoys walking through Guilford College and around the community (although stay-at-home restrictions have kept them from doing so recently).

Beyond the obvious bonds that the Coxes have to the area, Jonathan and Emille have also always loved the community itself and how the college and Friends Homes have maintained their natural beauty and calming atmosphere even as the Greensboro area has exploded with growth.

“When I was here before, it was like a village on its own,” say Jonathan. “It remains as an oasis in a large, fast-growing city… We like the idea of being able to retreat in that environment.

“Just knowing that Friends Homes is a very cordial and relaxed environment is important to us,” he continues.

“I really like the setting out there. It’s beautiful, quiet… but convenient to any place you need to be,” adds Emille.